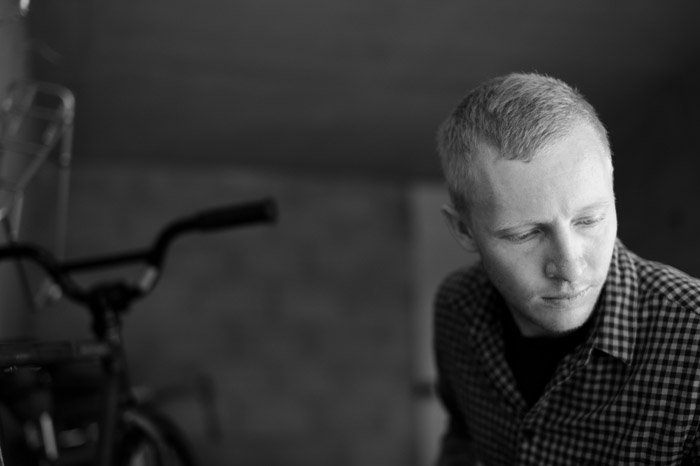 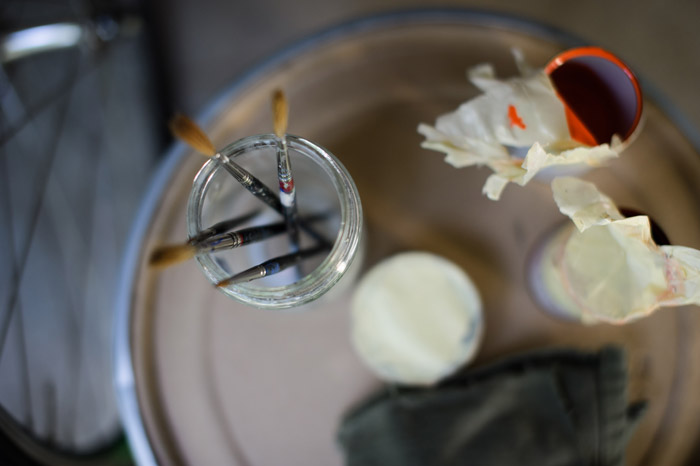 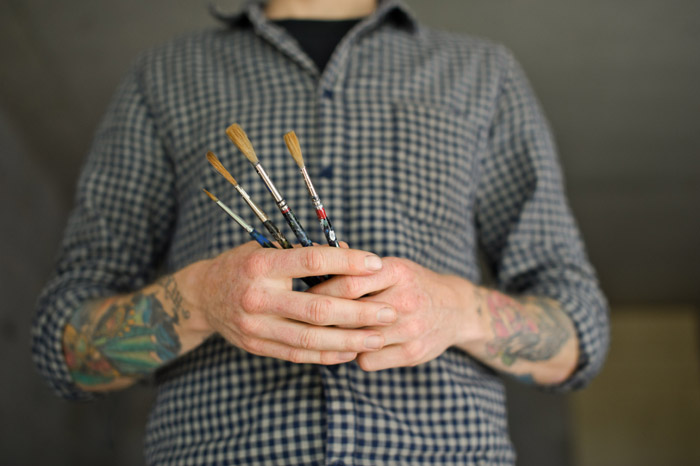 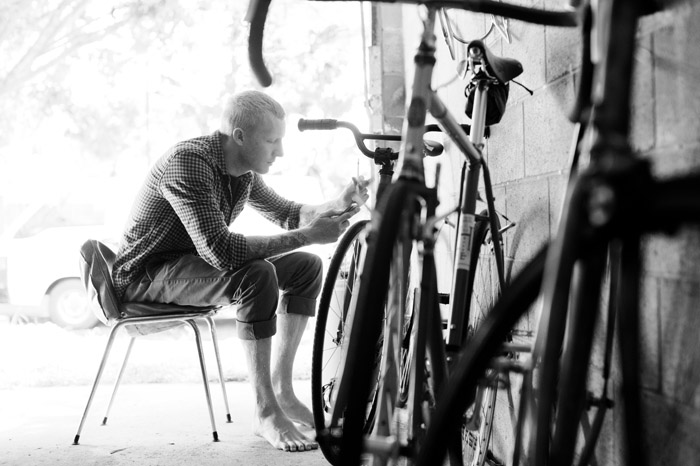 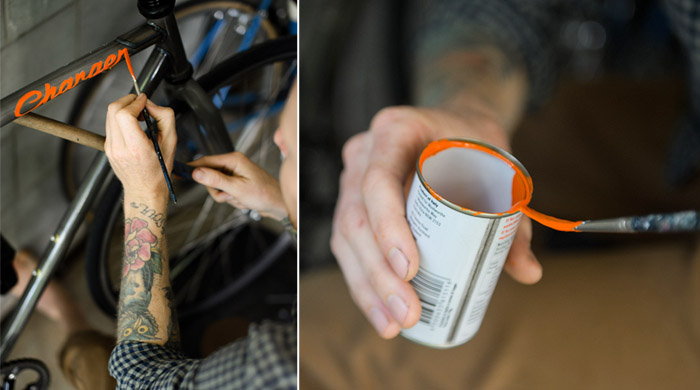 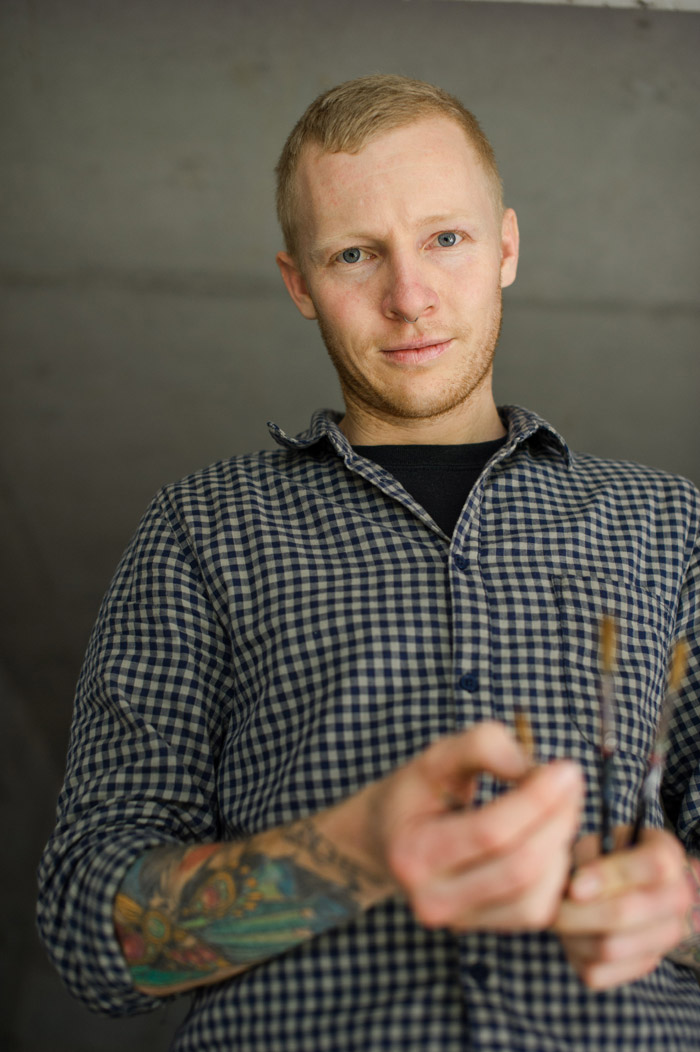 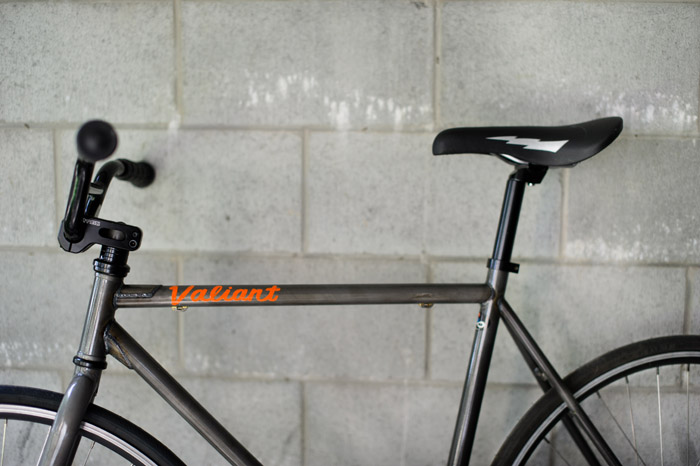 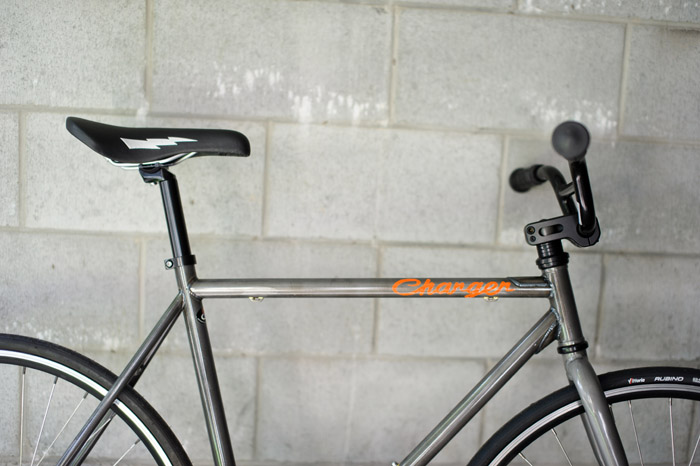 It’s funny how things go – you know, the what’s in and what’s out – especially, especially with cycling.  One minute everyone wants high tech, futuristic, up-to-the-minute, carbon fibre, this-could-be-on-the-next-spaceship gear loaded up with every conceivable bell and whistle and then, without warning, it is all stripped down, pared back, back-to-basics, streamlined, just man and the bike and nothing else.  Those cyclists are a schizophrenic lot…I wonder how they manage to get through a day let alone their whole lives.  Only kidding – Jason is one of those cyclists so I understand it all a bit too well.  His latest edition to the bicycle fold, the Carlton fixie, is a great example of why less is more – just the man and his bike pared back to the basics to produce a seamless ride of purity and oneness with the bike.  At least that is what I am told but to be honest – I just like the look of them.  No cabling, no tricky wheels, no carbon fibre – just steel, chrome and leather.  Well almost, because leather handle bar tape doesn’t survive general wear and tear very well, the handle bar tape he originally had on the bike was utter crap.  Nasty synthetic poorly applied – it hadn’t even lasted a few months before it had completely unraveled.  Inspired by this new blog I have been reading, Wood and Faulk, I thought I could apply this lovely cork bar tape and shellac it to match the colour of Jason’s Brooks seat.  All it needed was a steady hand and a perfectionist’s disposition – that is TOTALLY me!  Matt from Wood and Faulk has some really good links here and here which show you how to wrap your bars and how to tie off the string binding so that it is seamless and strong.  We got our cork bar tape from Rivendell but we also got some Cinelli cork bar on eBay.  However I didn’t use it because I didn’t like the embossed logos all over it.  (Am I becoming one of those cyclists I have been bagging out???  Could it be catching??)

Anyway I won’t go into too much detail but it was actually quite easy.  I have never wrapped handle bars before and was really very nervous about stuffing it up but as long as you go slow and keep the tension tight you really can’t go wrong.  The hardest part by far was tying off the ends but I realised that I could tape them down with some gaff tape while I tied the string to fasten it down and then trim the excess off with a stanley knife.  Easy peasy! 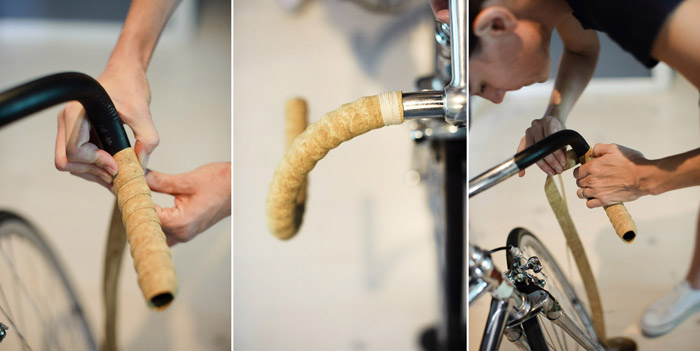 As you can see – and for anyone who has wrapped handle bars before – it was no different using cork to using cloth or plastic.  It is a really nice, natural material and looks just beautiful in its raw state.  I wonder what it would look like if we left it that way.  I’m pretty sure it wouldn’t weather that well but it really was nice.  We have had some issues with the stoppers at the ends – the handle bars are slightly different on each end so one stopper fits and the other is just a little small. We have been debating about putting cork on the end instead of the plastic stoppers – what do you guys reckon?  Yes, no? 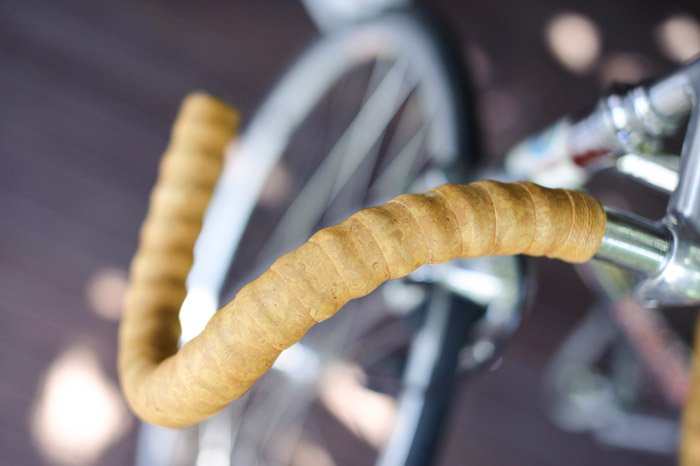 The next step was to shellac the cork and string.  The photo above was after one coat of French Furniture Polish (which is premixed shellac flakes and turps) in Dark.  We probably put on WAY too many coats – because we were trying to match the colour of Jason’s seat.  I did some further reading and realised that we could tint it darker so we went for Walnut (with Cedar in between).  If we do it again I would go straight for Walnut and give each coat about 24 hours in between.  (I did email Matt (in a panic!!!) to ask for some clarification and he told me that the shellac resoftens as you apply the next coat and given the humidtity we have here 24 hours would help it really penetrate the cork.)  Jason just applied it with a cloth but I think a brush would have been better.

In the end we did about 12 coats – and that is probably too many – I need to sand and put on the final coat to really make it shine but I am pretty happy with the result. Jason hasn’t been for a ride yet but I am hoping he finds them comfortable…and if he doesn’t?  Tough – sometimes you have to suffer for fashion!  (Thanks Matt for the inspiration and all your help!)