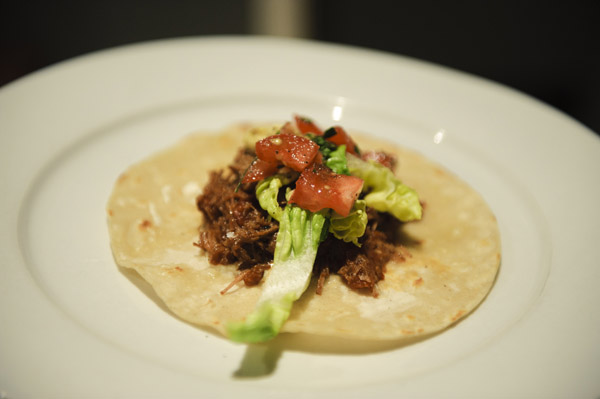 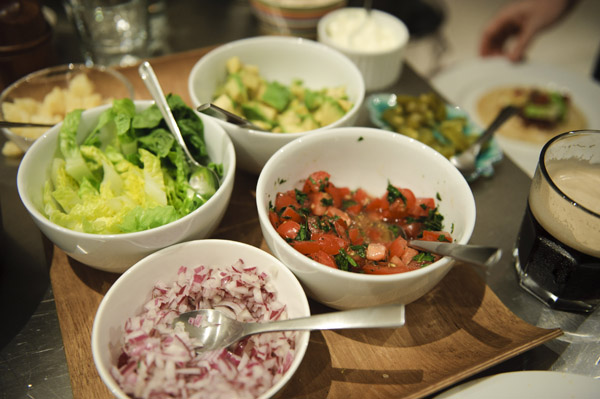 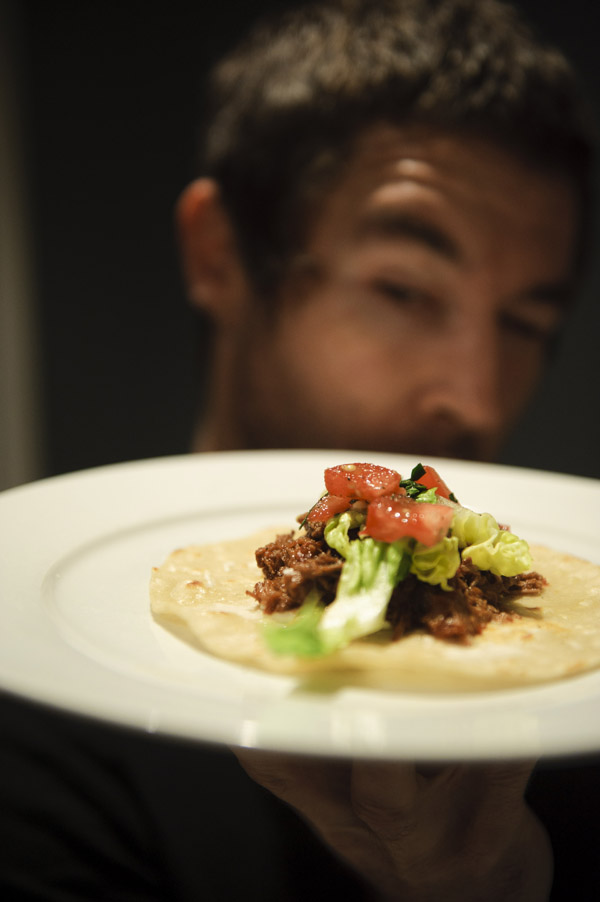 Taco night in our house was a big event when I was growing up.  They were so special cause you could make them yourself (so you didn’t have to have what you didn’t like), you got to eat them with your hands and they were oh so tasty in their hard corn-chip shell!  Of course now as an adult the Old El Paso stuff just doesn’t cut it for me anymore.  I want a more upmarket tasty version of my favourite childhood classic.  So when we had our friends Todd and Alyda over for dinner on Friday and I thought let’s fool around with tacos and see if we can’t unleash their powerful greatness.

And oh my – boy did we ever.  Instead of the gross packet spiced mince we used to have I lovingly cooked brisket for three hours. (I know that sounds like a lot of hassle but really I spent most of it sitting on the couch watching Sex and the City and shopping on the internet so it seemed like no hassle at all).  Here is the recipe and the only snag is you will need to order your brisket beforehand.  (I used cubed brisket which tasted fine but it didn’t shred as nicely as I would have liked so a full piece would have been the icing on the cake.)

Preheat your oven to 180 degrees celsius.  Season the beef generously with salt and pepper, to taste. Heat a large, heavy dutch oven over medium-high heat. Add the oil and heat just until beginning to smoke. Add the meat and cook, turning once, until browned on both sides, about 10 minutes total. Transfer the meat to a plate; leave the dutch oven on the heat.

Add garlic, onion, chili powder, coriander, and cumin to drippings in the skillet and stir until fragrant, about one minute. Add vinegar and boil until it’s almost gone, scraping the bottom of the pan with a wooden spoon. Stir in water and add brisket, tomatoes and juices to the dutch oven; as well as the chipotles, bay leaves, and molasses. Bake in oven for three hours (or until the meat pull apart in thin strands.)

To serve use two forks to pull it apart and stir it evenly into the sauce; season with salt and pepper, to taste. Remove and discard bay leaves. We had ours with avocado, tomatoes, onions and Manchego cheese as well as sour cream all on soft corn tortillas.  But you can have whatever fixins’ you like – cause that’s how your roll with tacos!