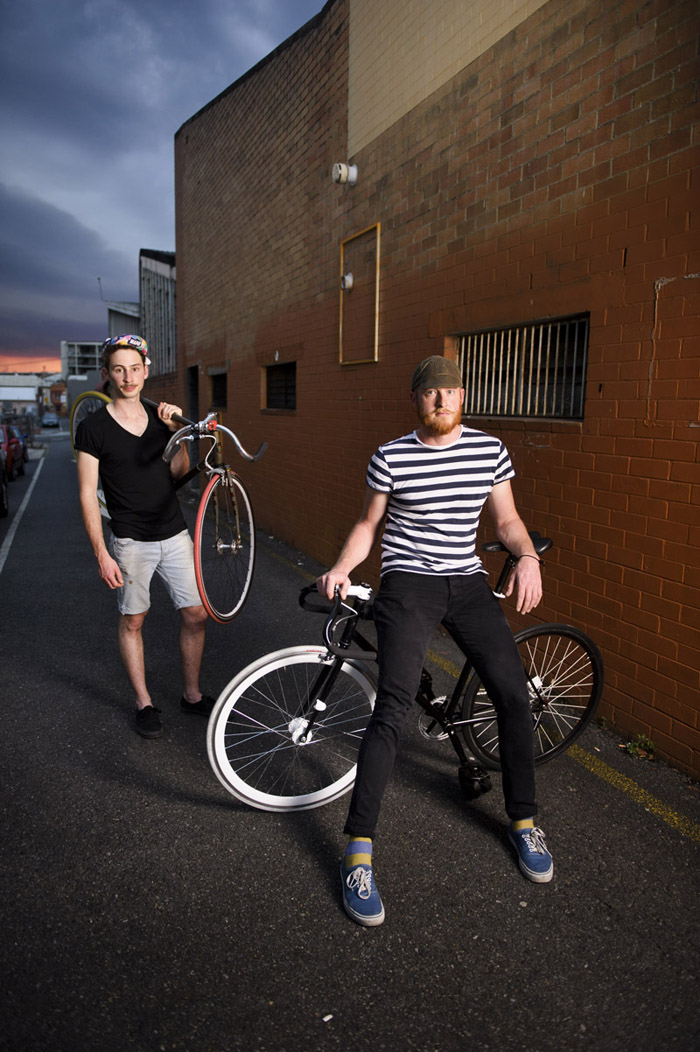 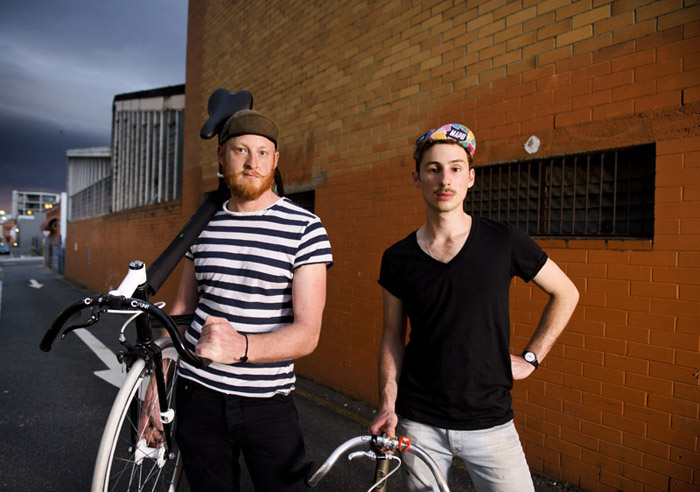 In keeping with our continued love and support for all things two wheeled and fixed, Jason recently shot another portrait of two local biker guys, Kai and Hugo.  It was on one of the days when a storm was brewing so the sky is quite magical and surreal.  So, too, are the bikes these boys ride.  As I can only speak from the way they look (and not how they ride) I will hand it over to Kai and Hugo to explain why you should NOT leave the biker!  Here’s Kai’s side of the story:

I’ve always had at least one bike since I was a kid and have done a lot of competitive riding in triathlons over the years.  However, until a recent trip to Melbourne the thought of owning a fixed gear hadn’t occurred to me.  I found the simplicity and personalisation of this style of bike a real charm and from then had to get one.

I now have two fixies, one pretty standard Felt chromo track bike and a modified carbon fibre Bianchi 986.  Both of which I use for commuting, regular rides mostly with my mates Hugo and Jeremy and generally reeking havoc in the Brisbane traffic.  There is something very elegant pure about riding fixed it’s now as if riding a geared bike is cheating somehow…

The Felt I had with me on the days was a black ’09 Brougham with a 43mm deep V on the front and standard black felt wheel on the back and is currently running 47t – 16t.  I’ve also added BMX style pedals and BOgear Strap Ons, a BOgear top-tube protector (which doubles as a cooler big enough for a tallie) and a set of C/unit track bars.

Thanks Kai.  These bikes are really a thing of beauty and anyone who knows me knows I LOVE cool packaging – and the fixie is the epitome of cool packaging!

Not to play favourites we also asked Hugo to tell us about his piece of loveliness and he gave us poetry on the thrill of the fixie ride. 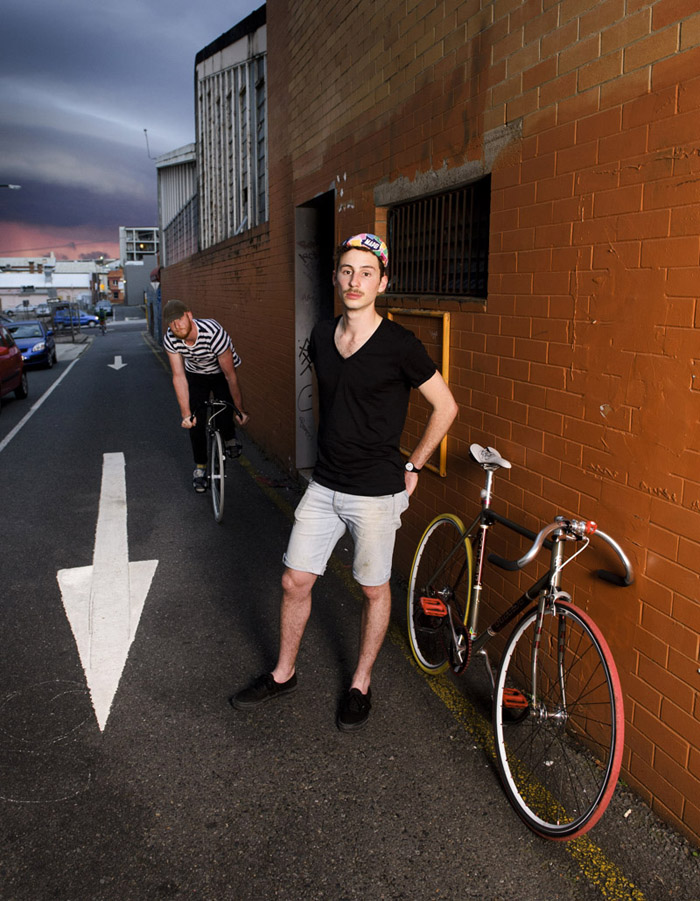 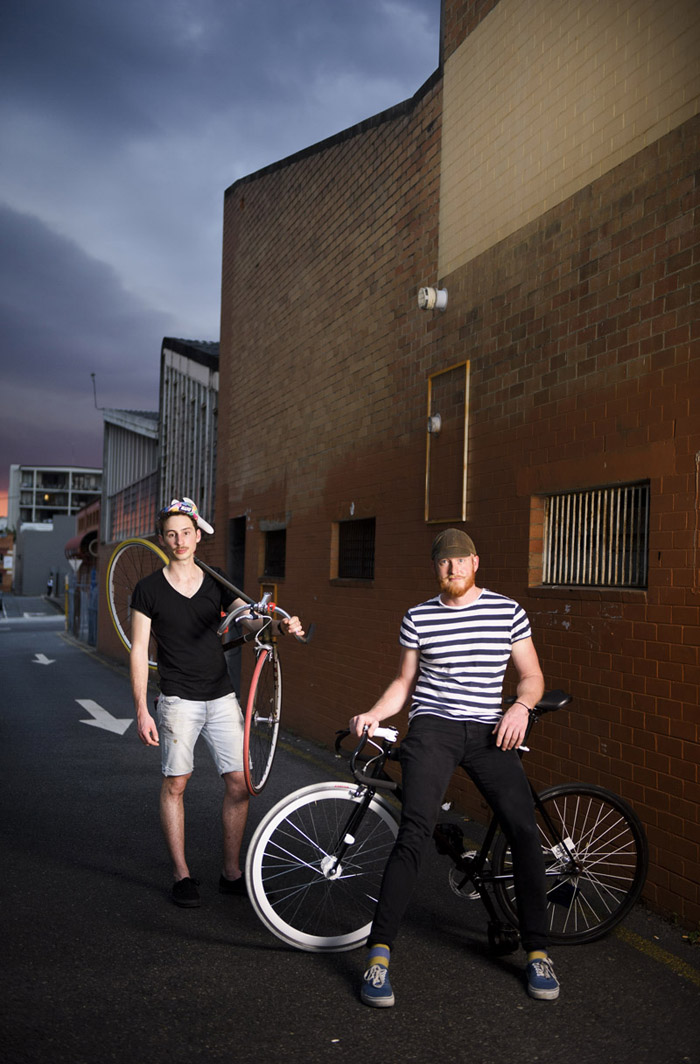 I can remember from a young age watching the Tour de France on TV at home with my dad and brothers and for those 3 weeks of the year every night at 6pm the voices of Paul Sherwin and Phil Liggett would fill the house. I can still rattle off names of riders that stopped riding years ago purely because I grew up watching them and hearing their names.

It was my brother Jeremy, a former competitive cyclist, who told me about fixed-gear riding. The simplicity of it all, coupled with a healthy dose of visual appeal and potential for customization really spoke to me. I love that there are these bikes that are specifically designed for velodrome use- no brakes or other gears, with highly specialized wheels and handlebars and people are out there taking them to the opposite end of the spectrum: the road and traffic. There’s a surfer saying that, “Only a surfer knows the feeling,” well it’s the same for riding fixed. Your legs are the brakes and gears which really create a “oneness” with the bike that you can’t experience riding a normal bicycle or even single-speed.

My MASI has been a great companion into the fixie world (yes I feel guilty that it’s my first bike). It’s stiff and really responsive. I “won” it on eBay as a complete for a great price but have since made a few changes. Notably adding some red Odyssey BMX pedals and BO Gear Strap-Ons, which are a little too good at holding your feet in. Recently I put on some C-Unit drop bars which are really great. They are probably the fourth set of bars I have put on after trying out the various styles, but I love the look and feel of track-style drop bars the most. After wearing through two tyres in about six weeks I’m thinking it’s probably time to upgrade to a higher quality tyre, but the cheap colourful ones are a heck-load of fun.

If this becomes the worst addiction in my life then I guess it’s okay, even if my girlfriend rolls her eyes every time I point out a customised build-up to her or even say the word “fixie.” I’m keen to get right into it and try a few alleycats and some bike-polo. Maybe even a Keirin race someday…

Thanks so much guys – we hope you like the photos and we hope they did your bikes justice!  I loved your stories and agree wholeheartedly about the addiction thing – Jason seems to be looking again for another bike and other than taking skin off my shins everytime I have to go into the storage room I can’t really complain.  I mean when he is riding his bikes he completes the package – or becomes packaging…does it really matter which? 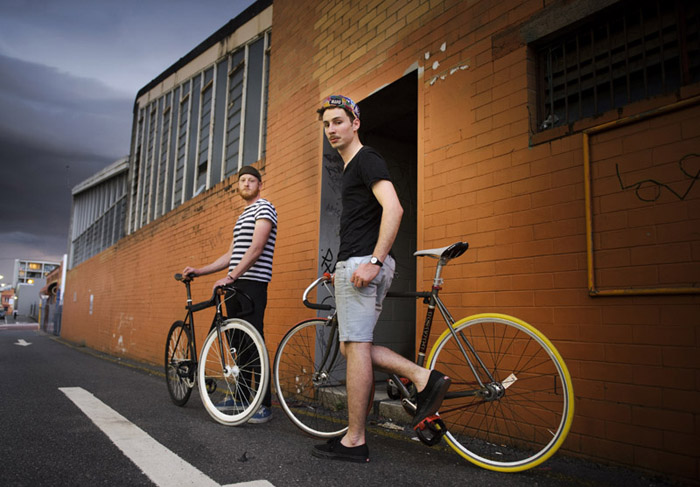