Now huddle up people, gather round, I need to let you in on a little secret.  Before you even attempt this recipe let me warn you good and proper – it is not for the faint hearted.  It is four, full hours and four, heavy kilos of sweat, tears (and trust me – there were tears) and pain.  You’ve really got to hand it to the French, they have a knack of managing to make something as humble and simple as a soup, an almost operatic experience.  I mean, have you ever thinly sliced four kilos of onions and then sweated them in and world of butter and their own juices for over four hours?  Not only that they need to be stirred every 20 minutes of those four hours – to help with the caramelising process!!!  If that ain’t opera, I don’t know what is? 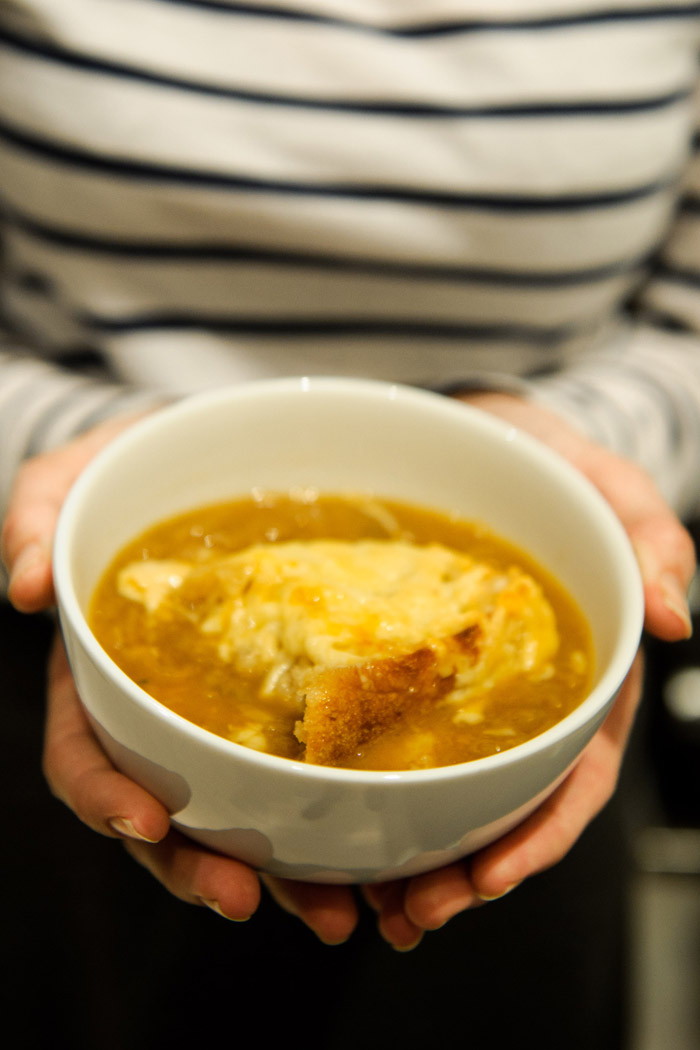 I made this soup for a dinner we recently had with a bunch of friends who are all crazy into cycling.  For some reason unbeknownst to me, we are making our way through every cycling film ever made and this night it was The Triplets of Belleville, a crazy animated film about a mother searching for her son who was kidnapped from the Tour de France.  As you can see from the photo I even dressed for the part – I love a good costume party!  Although everyone enjoyed themselves, and raved about the soup, I just could not get over the four hours of stirring and sweating, FOUR WHOLE HOURS!!!  Just thinking about it now makes me need a lie down…so, it is with trepidation that I give you this recipe.  Please don’t blame me if, at the end of cooking it, you would rather throw it at your guests than serve it.  You have been duly warned.  (And also remember, as with all recipes that use only a few ingredients, make sure you use the best you can – as it will really show in the end result.)

16  slices of baguette cut on diagonal

Melt butter in a large, heavy-based saucepan over medium heat, add onions, cover and cook, stirring occasionally, for 20 minutes or until onions are soft. Remove lid and cook slowly for 2 hours or until soft and starting to caramelise. Stir at approximately 20 minute intervals so the onions won’t burn.  Add stock, half a cup at a time, and simmer for 5 minutes or until stock has almost evaporated. Repeat three times more until 2 cups of stock has been added. Using kitchen twine, tie herbs together, add to onions with remaining stock and season to taste with sea salt and freshly ground black pepper. Bring to the boil, reduce heat and simmer, scraping the base to remove any caramelised bits, for an hour or until thick. Makes 8 cups.

Preheat oven to 200 degrees celsius. Ladle soup into an oven-proof casserole dish and transfer to an oven tray. Scatter with half the cheese, top with baguette slices and scatter with remaining cheese. Place in oven and cook for 5 minutes or until cheese melts. Serve immediately. 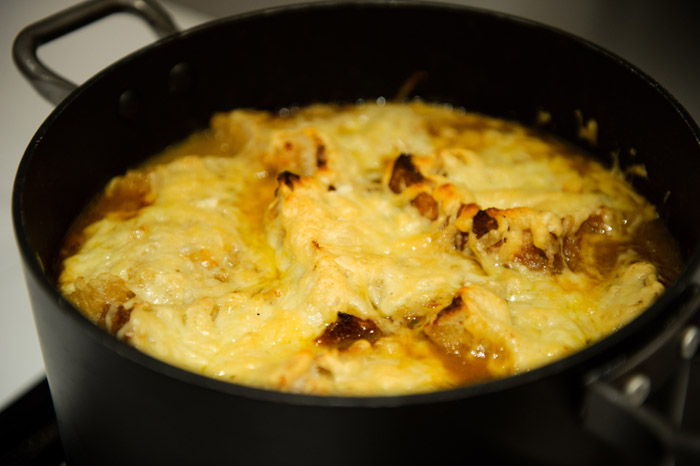