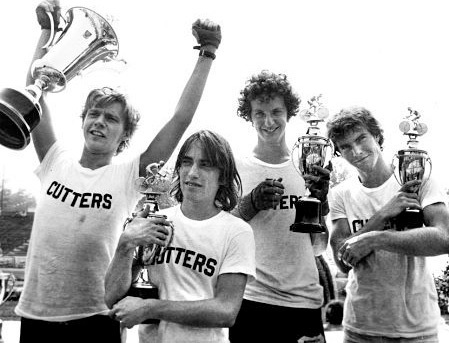 We had some friends around last night to watch the seminal cycling film, Breaking Away.  It is seminal (at least in my mind) because when Jason and I first met we discussed how much we both loved it.  The conversation was unique because before I met him I don’t think I had met anyone else who had ever seen the film.  I remember mum taking me and my sister to see it at the Schonell Theatre when we were little.  After that conversation with Jason came other conversations of course, but it became the first of the many tiny threads that bind us to each other.  We own the DVD and watch it every now and again and it still delights me as much as it did at my first viewing.  Plus the styling is awesome – especially if you like old retro 70s cycling gear.  If you get a chance to watch it – other than it being the most politically incorrect film of all time – it is worth it.  Sometimes we all need to break away from the old and forge a new path for ourselves, regardless of what others may think of us.  A new year brings new beginnings.